States of Mind: American and Post-Soviet Perspectives on Contemporary Issues in Psychology 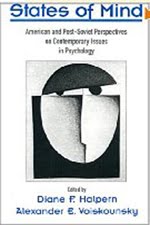 Upheaval in the former Soviet Union has broken down many barriers to intellectual exchange. In this volume, Diane Halpern and Alexander Voiskounsky step into the breach to look for the first time at the different ways in which two world powers have defined contemporary psychological issues. Because access to Western literature in psychology was strictly controlled until 1991, much of Soviet psychology developed independently of Western ideas. Likewise, impediments in communication also prevented Western researchers and theorists from enhancing their work with Soviet perspectives. States of Mind explores this newly open territory, addressing current issues from both post-Soviet and American perspectives.

States of Mind: American and Post-Soviet Perspectives on Contemporary Issues in Psychology

"What a brilliant idea to bring under the cover of this book the results gained by Eastern (post-Soviet) and Western researchers on the same or close psychological problems. The authors are not competing with each other, they are making a mutual breakthrough to meet the challenge for the benefit of world science and of each particular reader."
--Victor A. Sadovnichy, Rector of Moscow State University