Thought and Knowledge: An Introduction to Critical Thinking 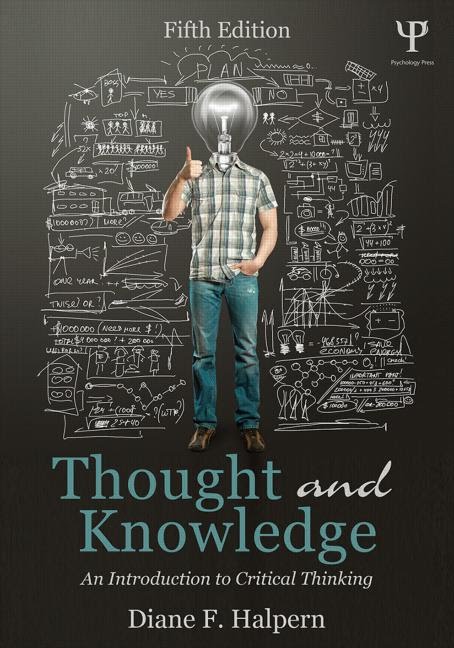 This best-selling textbook, written by award-winning educator and past president of the APA, Diane Halpern, applies theory and research from the learning sciences to teach students the thinking skills they need to succeed in today's world. This new edition retains features from earlier editions that have helped its readers become better thinkers. A rigorous academic grounding based in cognitive psychology is presented in a clear writing style with a humorous tone and supported by numerous practical examples and anecdotes.

Thought & Knowledge, Fifth Edition has been revised to help students meet the challenges of a global neighborhood and make meaningful conclusions form the overwhelming quantity of information now available at the click of a mouse. The skills learned with this text will help students learn more efficiently, research more productively, and present logical, informed arguments.

Thought and Knowledge: An Introduction to Critical Thinking (5th Ed.)

"Being able to come up with creative solutions to problems is recognized as a fundamental 21st century skill—sometimes discussed under the rubric of creativity, innovation, problem solving, critical thinking, reasoning, argumentation, or decision making (National Research Council, 2012). Today’s business learners and educators agree that helping students learn to be effective problem solvers is a primary goal of education, as reflected in current curriculum reform efforts such as the Common Core Standards in the United States (Porter, McMaken, Hwang, & Yang, 2011). Thought and Knowledge: An Introduction to Critical Thinking by Diane F. Halpern offers a timely and compelling overview of what psychology has to contribute to this 21st century goal of improving students’ ability to think.

The search for ways to improve how people think has a long history in psychology (Mayer, 1992), but recent advances in the research base have enabled psychologists to propose evidence-based strategies for applying cognitive science to education (Dunlosky, Rawson, Marsh, Nathan, & Willingham, 2013; Halpern, Graesser & Hakel, 2007; Mayer, 2011; Pashler et al., 2008). Halpern’s book builds on these recent advances in applied cognitive psychology while also linking key concepts to their historical roots.

Halpern’s book, now in fifth edition, is even more contemporary today than it was 30 years ago when the first edition appeared at a time when books were handwritten or typed on typewriters and the tools of scholarship did not rely on the Internet. Halpern notes in the preface that “despite all the changes in technology in the last 30 years…the need to think critically has not changed” and “one might argue that it is even more important now that everyone has easy access to more information than they can possibly use and much of that information is biased” (p. xv). Like a polished stone, the fifth edition refines the essential elements that made the previous editions successful, while incorporating much up-to-date material published within the past decade.

The book provides a comprehensive introduction to how thinking works and how to improve how we think—including chapters on critical thinking, memory, language, reasoning, analyzing arguments, hypothesis testing, understanding probabilities, decision making, problem solving, and creativity. The book broadly surveys the key concepts and research findings in the upper half of cognitive psychology dealing with higher cognitive processes, while maintaining a consistent focus on applying cognitive psychology.

I particularly enjoyed the chapter on “Analyzing Arguments,” which provides a step-by-step guide to creating and evaluating arguments. In the chapter we learn how to diagram the structure of an argument, including premises, conclusions, assumptions, qualifiers, and counterarguments. Halpern teaches us to search for missing components that can affect the soundness of an argument, and alerts us to 21 common fallacies. Yet, the chapter also reminds us of the need for psychological research to help test some of the chapter’s suggestions and implications.

Halpern writes in a friendly and personal style that communicates directly with you as the reader, and she keeps you engaged by providing concrete and practical examples. For example, in the reasoning chapter she helps you analyze the logic behind bumper stickers such as, “Off-road users are not abusers” or “If guns are outlawed, only outlaws will have guns.”

As a past President of the American Psychological Association and an award winning researcher and teacher, Diane Halpern certainly has the credentials to write Thought and Knowledge: An Introduction to Critical Thinking. She is not only a master researcher and scholar who has contributed to the field of applied cognitive psychology, she is a master teacher who knows how to take scientific material and make it understandable, personally relevant, and enjoyable. It is a treat to read a book on thinking by an undisputed leader in the field, who has been thinking about thinking and refining this book for three decades.

As with any psychology book, choices had to be made about the level of detail in describing research studies. In the interests of providing broad coverage and bottom-line conclusions, the book generally does not offer much detail about the specific methods and results of individual research studies or systematic literature reviews, instead offering general summaries such as, “the jury is still out on the effectiveness of problem-based learning” (p. 454) or “recent reviews found that drawing concept maps is a more effective method for facilitating recall than creating lists or outlines” (p. 156). If you are interested in applying your thinking skills to critiquing the methodological or theoretical soundness of specific research studies or research literatures, this book may not provide sufficient depth.

In short, it is clear that Diane Halpern has made a significant contribution to the field of applied cognitive psychology with the fifth edition of Thought and Knowledge: An Introduction to Critical Thinking. Overall, you will find an enjoyable, comprehensive, and current introduction to the field of human thinking, with topics ranging from how to analyze the soundness of an argument to how to think with probabilities, and from how to come up with a creative solution to how to avoid pitfalls in decision making. If you are interested in what psychology has to say about how thinking works and how to improve your thinking, then Thought and Knowledge: An Introduction to Critical Thinking belongs on your bookshelf."
— Richard E. Mayer, Department of Psychological and Brain Sciences, University of California, Santa Barbara

“The level of sophistication about the psychology of reasoning, decision making, risk, etc. is much higher than standard critical thinking texts - as one would expect given the author's credentials.”
— Frank Fair, Professor of Psychology and Philosophy, Sam Houston State University, and Managing Editor of Inquiry: Critical Thinking Across the Disciplines

“I continue to be impressed by the breadth of depth of the scholarship presented herein, especially the rich examples and everyday experiences of the author that illustrate her points about critical thinking.”
— Dana S. Dunn, Professor of Psychology, Moravian College, and former President of the Society for the Teaching of Psychology

“Diane Halpern has a nice, friendly style and a gift for vivid examples. What her text does really well is marshal the 'factual' material in a way I haven't seen before, and in a way that will engage readers.”
— Ken Manktelow, Professor of Psychology, University of Wolverhampton

“. . . remarkably inclusive in its coverage of both modern research findings and the repertoire of approaches to the teaching of reasoning, problem solving, creativity, and decision making. . .The intellectually curious student will find paths of exploration opened by this book, instead of being constrained to someone’s nearly packaged, spuriously confident definitions of good thinking process.”
--- Contemporary Psychology

"Diane Halpern's thinking about thinking emerges as a one-of-a-kind multifaceted gem, sparkling in its substance, style, and sensibility. It is just what the doctor ordered for anyone seeking to develop skills in quantitative reasoning, evidence-based argumentation, or simply 'good' thinking. And, despite the formidable challenges presented by such topics, the book triumphs in the 'fireside companion' domain--a sheer delight to read!"
—Joel R. Levin, University of Wisconsin

“…Accurate and thorough update about information on critical thinking. …Gives students practical suggestions on how to read and review chapters in textbooks.” It is a recommended text!
--- Professions Education Research Quarterly Review.